It is the goal of the Newark Public Schools to provide a foundation in science that will serve the learner throughout his/her lifetime. Through participation in research-based science activities, students develop the skills of observing, questioning, inferring, experimenting, calculating, analyzing and evaluating. These processes expand and enhance a student’s natural curiosity about the world in which they live and enable them to gain knowledge needed to be successful in the next millennium.

It is the goal of the Newark’s Office of Science Education to raise the level of science literacy by providing on-going staff development, workshops, seminars, science activity centers, laboratories, computer and library resources, and after school science clubs for district students, teachers, administrators, parents and community.

Inspire Science is built with the proven 5E instructional framework that provides an in-depth, collaborative, evidence-based, and project-based learning experience to help you put your PreK–12 Science students on the path to career and college readiness. Built for NGSS. Built for NGSS. Phenomena-Driven Learning.

The IQWST Science curriculum utilizes a three-dimensional learning model wherein Science and Engineering Practices combine with Disciplinary Core Ideas through Crosscutting Concepts in the areas of Life, Physical, and Earth and Space Science to build scientific literacy. The adopted IQWST program supports this model through its standards-based, investigation -centered approach to learning. In addition, IQWST aligns to the Oklahoma Academic Standards for Science that promote a deepened understanding of core ideas and practices as students move from grade to grade. 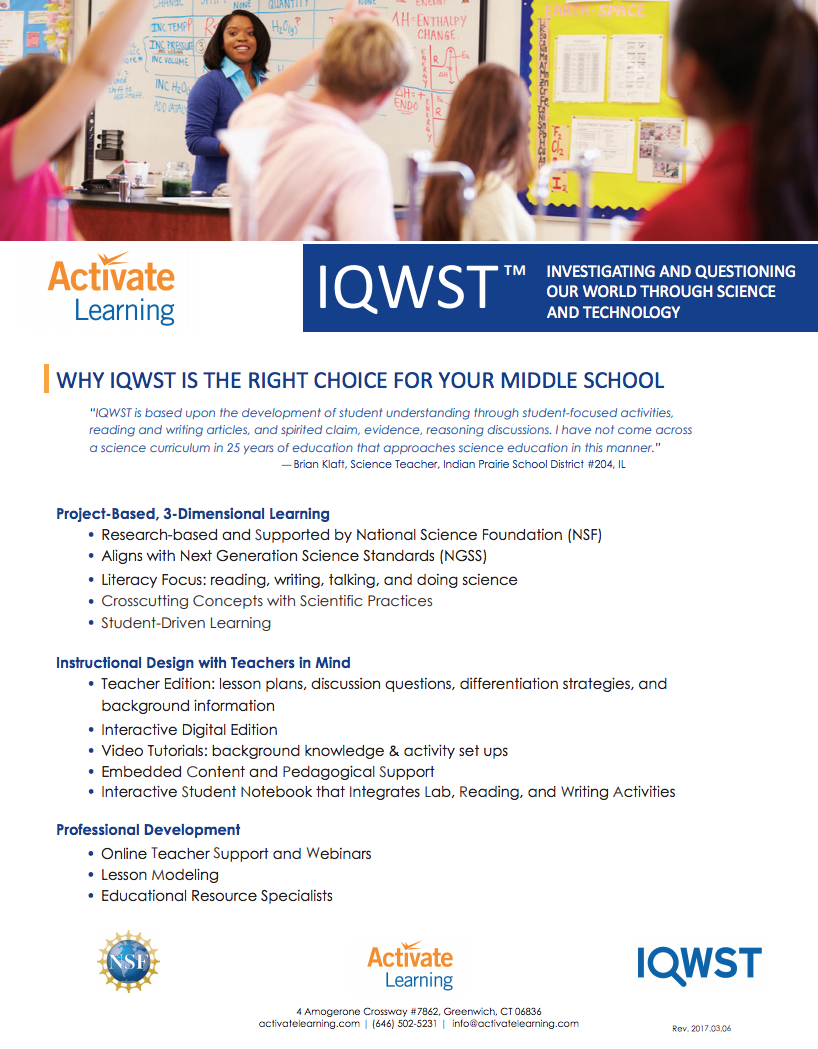 Every science teacher understands the value of students being able to explain phenomena, not simply to define vocabulary words or to answer questions that require them to show what they have memorized. But teaching students to construct explanations is challenging.

To begin, students must be asked questions that require them to think deeply about what they have observed, read, and experienced and to integrate that information as they explain the how or why of phenomena for a specific purpose and audience. Although an explanation must function as a whole, teachers often find it easier to teach the components separately and explicitly. A claim is a statement of a student’s understanding about a phenomenon or about the results of an investigation; it answers the original question by expressing what he or she is trying to help an audience understand and believe. In practice, teachers often teach that a claim cannot begin with "yes" or "no," and is typically the first sentence of an explanation.

Although a claim does not need to be the first sentence in an explanation, it is helpful for students to learn to construct explanations with specific guidelines that can be varied later. The claim is typically the part of an explanation that students find easiest to include and to identify as they critique others’ explanations. Claims may be made about data that students have been given or that they have gathered themselves. If an investigation has independent and dependent variables, the claim describes the relationship between them. The quality of an explanation is largely dependent on a good question to begin with, so consider first the question. After an investigation, have students return to that question, and their response, in a sentence, is typically a claim.

While data can refer to all the observations that students have collected or analyzed, data become evidence when used to support a claim. A claim is convincing to someone else only when there is strong evidence to support it.

The evidence for explanations can come from investigations students conduct, from observations they make, or from reports of empirical research others have done. In complex situations, more than one claim might be made about a single data set thus having accurate, appropriate, and sufficient evidence is what makes a claim convincing. The idea that multiple claims might be made using the same data develops across the IQWST curriculum as the inquiry activities become more complex, and students’ options for research questions (and resulting claims and evidence) become increasingly open ended. One challenge of the evidence component is that students assume they do not need to describe the data because their teacher and classmates already know what happened! Thus, helping students to decide which data to choose and how to present those data as evidence is a key step in the process of learning to construct an explanation. Significant time must be devoted to helping students understand what counts as good evidence in science, drawn from qualitative and/or quantitative data, and what it means for evidence to be both appropriate and sufficient.

Reasoning is the most challenging for both students and teachers. Reasoning illustrates why particular evidence is the correct evidence to use in support of a particular claim. Reasoning typically includes describing the scientific knowledge or theory, or what IQWST refers to as the Scientific Principle, that applies to a particular claim and evidence. The principles are not given to students, but are “figured out” through their own investigations and in the context of whole-class discussions.

Reasoning requires students to make explicit the steps of their thinking, showing the logic that leads from the evidence to the claim. Critiquing examples of explanations helps students recognize the components and the need for them. They quickly learn to determine what is missing or inadequately expressed—and because they find this easier than constructing their own explanations, it is often a good starting point. Sharing an anonymous example from 3rd period with students from 1st period enables students to learn what to look for without feeling criticized early in the learning process. IQWST provides systematic scaffolding to guide students in constructing explanations of scientific phenomena, and to support teachers in facilitating this process. Using evidence and reasoning to construct explanations is one of the most important practices students can learn, with application beyond science class to high school, college, career, and citizenship readiness in all areas!